As usual the bureaucracy to enter Peru’ was somewhat complicated. Maybe due to the border we chose, but it literally took us two hours to get our permit to enter the country. The first little village after the border of “La Balsa” is called San Ignacio, but because we have a late start we are forced to drive the 50 KM in the dark in an extremely muddy road. A real challenge. The muddy roads will be with us for the majority of our ride through the Amazonian part of Peru’. We did not expect to ride in the amazon. The path we took had 100% humidity, rice fields, tropical fruits, and major red rivers. It really felt riding in the jungle once again. 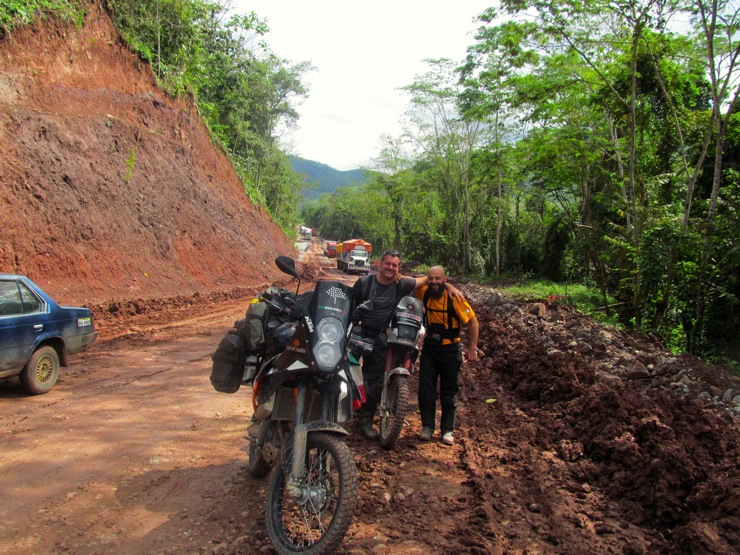 This region is also important for the production of the Coca plant. The territory is therefore governed by the “Narco trafficantes”. The production of the plant is legal in Peru’ but the government does not pay this crop as much as the dealers. It is easy to understand that the coca grower are more likely to deal with the “Narcos” because they pay way more for their product. It was told to us, that nowadays the region, is much more calm that it was a few years back. We also encountered a few blocks from the campesinos, but we were allowed to continue our trip after answering a few questions of why we were traveling through this part of Peru’. This would have not happened a few years ago. They simply would have not allowed us to pass through.

Following the course of “Rio Huallaga” until Tingo Maria we end our journey through what is called the Amazonian Peru’ and start climbing toward the central highlands. The Andean scenery is drastically different: The vegetation is looking much drier, the air starts to be cool and the sky seems to be closer. When we meet the fist Alpaca, we realize that we are finally in the Andean Peru”.

We reach Cerro de Pasco, the highest city in the world ( 14,550 feet ), at around 4.00 PM. We both feel the altitude by feeling a little dizzy and sort of “drunk”. Cerro de Pasco is a little city with the majority of the inhabitants being miners. It is not that interesting, therefore we decide to eat and go to rest because Peru’ is a big country and we still have many kilometers to ride.