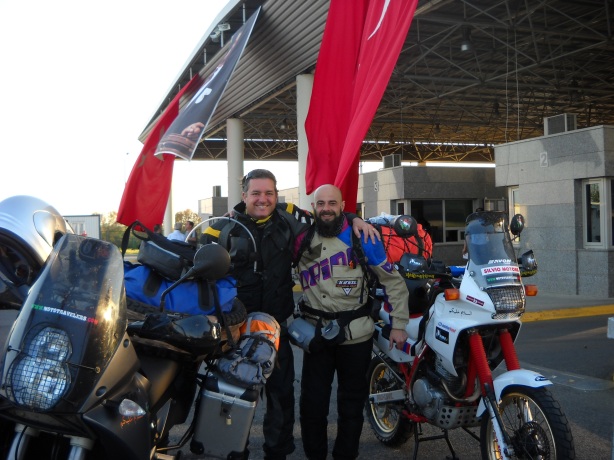 Another  long day today. From Kesan to Gerende about 600 Km non stop. We departed Kesan at 10 Am, as of course, for the people that know me well I lost my shoes and had to buy another pair. Turkish shoes this time. Honey this time you will love them. I promise. While I was busy buying my shoes, Matteo was approached by the local Iman. He received an Islamic Rosary and a beautiful blessing. Wonder Why ?

At about 3 o’clock in the afternoon we met Ricardo: a brazilian rider that has done the karakum desert in Turkmenistan in 2009. He said that the desert is hell on hearth. There is no gas for at least 550 Km and the heat can reach 40 C. It’s not safe to camp and the road is horrible. He recommended us to leave for the desert at 4 AM to avoid the heat. Ricardo said he fell so many time due to the sand. It is a very fine powder. I let you imagine our state of mind riding after the meeting with Riccardo. We are still quite far from Turkmenistan so we will write about that when we get there. For now we have found a beautiful bedroom in Gerede where we will spend the night for an early morning departure.

Our Hotel Room in Gerede

Another long day on the road. Getting really close to Georgia. Today we had our first encounter with the black market. We were in need for some Turkish Liras and only had some dollars to buy gasoline and food. We asked directions for a bank and we were taken to a jewellery store instead.

After exchanging the money we traveled at about 3000 feet all day in a beautiful country side until we finally made our descent toward the Black Sea. We will stay in Persembe for the night and tomorrow we should cross the border with Georgia.

Left a little late this morning. At the first fuel stop we were stopped by the owner of the gas station that wanted to introduce his friend to us. There was no way we could get out of it. When you travel on the road you learn not to fight DESTINY so we accepted patiently. We had to drink 3 cay (Turkish Tea) each before we were allowed to leave.

We were so late that we had to speed a little to reach the Georgian Border. Surprise Surprise, we were stopped by the Police for speeding. Matteo’s beard once again saved us and we did not get a ticket but just a warning. 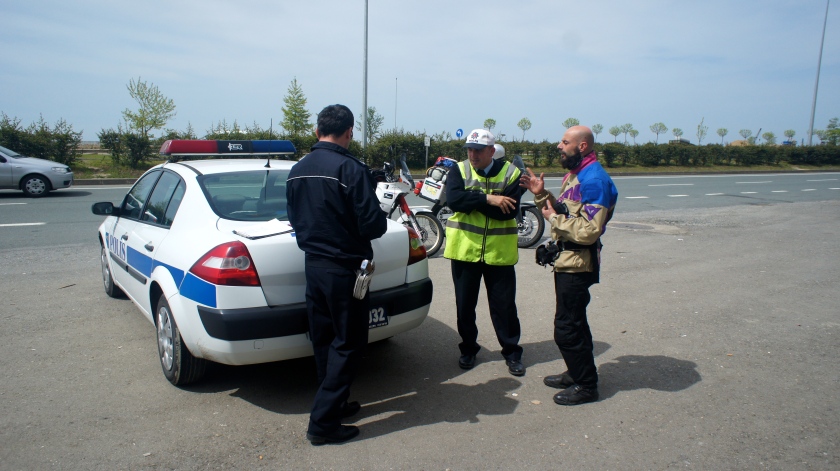